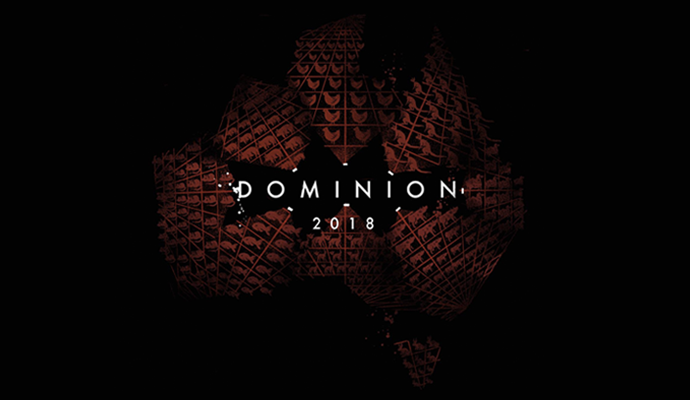 Posted in Uncategorized By JamesDuffyPosted on October 21, 2015November 11, 2019

Last year, abolitionist animal rights group Aussie Farms produced an incredibly hard hitting documentary called Lucent, which focused on their country-wide undercover investigations into the Australian pig farming industry. Penciled in for a 2018 release is the sequel feature-length documentary Dominion, that has been labeled as the revolutionary Earthlings-equivalent for Australia.

It would make sense to say that one could imagine just how brutal this kind of footage would be, but the vast majority of Aussies believe that animal cruelty and abuse simply does not happen in a country “like Australia”. That, with our (minimal) animal protection laws and above average concern for animal welfare, our policies and procedures in growing animals and taking them to their forced deaths couldn’t possibly be cruel, brutal or painful.

The shattering 2014 documentary Lucent certainly delivered its original message to ‘open up the doors and light up the dark’ and shone a very large spotlight on the Australian animal agricultural industry. The harrowing images took us deep inside the operations of fifty assorted locations in Australia, including Rivalea, the largest slaughterhouse in the country, and Wally’s Piggery, the setting for some of the film’s most damning indictments.

There, pigs were filmed being savagely beaten with sledgehammers until rendered dead or unconscious, while others were serrated by knives at the neck, left struggling in the throes of slow death. Such barbaric practices are far from isolated, which is one part of what the film intended to teach. In fact, the abundance of footage obtained by the filmmakers reveals that animal cruelty of this magnitude appears to be standard operating procedure in Australia.

Slated for a 2018 release, Dominion will take it one step further and show the questionable treatment and use of animals across six primary facets—Pets, Wildlife, Scientific Research, Entertainment, Clothing and Food. Much like with Lucent, the film will question the morality and validity of our dominion over the animal kingdom. However, they need public fundraising assistance to make the film happen. Chuffed, a completely not-for-profit organisation, is the crowd funding platform launching the Dominion campaign. Fundraising is open for another 49 days and you can donate now to be part of a very important film.

Lucent was the Tip of the Iceberg

The never-before-seen surveillance and handheld footage captured by the devoted team of animal rights activists produced a film which clearly reveals a culture of abuse that has remained hidden in the shadows for far too long.

Lucent showed us mother pigs are tightly confined within a cage that is so restrictive that they can only take the faintest of single steps. Then, once a day, these mother pigs are beaten to stand upright by factory workers to ensure that paralysis doesn’t set in due to the lack of mobility. Their rigid living areas also create extreme mental anguish, which any sentient being would experience here, and it produces a psychosis so profound that many mother sows bite furiously on the bars which enslave them.

Thousands of mother pigs endure a constant cycle of artificial insemination and due to the lack of care, malnourishment and disease, they are often forced to watch their young babies die and decompose in front of them. Their bodies are full of scars and open festering wounds from neglect, and their on-going screams multiply down every corridor, echoing in these large factory sheds of horror.

Such a large spotlight shone on the unseemly environments that millions of mother pigs and their young are forced to endure, along with the unethical and morally abhorrent practices of Australia’s pig farms and slaughterhouses, was a long time coming for animal rights activists. With certainty, no longer can anyone wash their hands and simply state that Australia is somehow different to the rest of the world—as if our standards and conduct around killing animals is more ethical or right. Was the Australian animal agriculture industry impressed by Lucent? Not at all.

Chris Delforce, executive director of Aussie Farms, had his Adelaide home raided during mid-2015 as part of a joint NSW and South Australian police investigation into the video footage of intensive farming practices, obtained via trespass at rural piggeries. A petition was created to protest the raid and to end the harassment by police [of Chris Delforce] and quoted that he is a compassionate, caring member of our society.

Pigs are incredibly social, curious and highly-intelligent animals, who want to live just as much as we do.

Chris Delforce also spoke to the ABC in January 2015 regarding Aussie Farms and how none of this footage would have ever of made it to public view without the work of animal activists. He’s quite right—in fact, Australia’s first Ag-Gag styled law recently passed through parliament in NSW which seeks to prosecute those who expose animal abuse, while protecting those who commit it. Activists causing any economic damage will face imprisonment from 5 years up until 20 years and the forced surrendering of animal abuse footage within a mere few days to an authority creates impossibly short timeframes for the submission of any long-term observed cruelty, which means no pattern of abuse, or widespread abuse, can be documented the way it has been with Lucent.

What Will Dominion Achieve?

Lucent presented an enormous amount of unblinking evidence regarding the inherent cruelties in the Australian pig farming industry and Dominion—without doubt—will do the same thing across all of the Australian industries which exploit and use animals. Of course, such industries exist all across the globe, but the belief system that many Australian’s hold is that we are somehow different and thus, so is the fate of the animals who exist and die here.

What else can present such a convincing argument about the systematic and dominating industries that profit from using animals for the benefit of humans except solid, factual, visual evidence? It stirs the cognitive dissonance around ready for confronting, it cements the conviction of those who already believe it’s wrong to use animals, and it educates those who have never thought about what happens to animals.

When we know that the animals who are killed for food, who are beaten to perform tricks, and who are caged for medical experiments are thinking, feeling beings with interests, who have the very clear ability to suffer and feel pain, why shouldn’t they be afforded the same level of consideration to that of humans?

Aussie Farms are fighting to end commercialised animal abuse and exploitation through public education about modern farming and slaughtering practices.

What ‘Lucent’ Showed Us, ‘Dominion’ Will Confirm | Shellethics
Scroll to top