Skip to content
Posted in Uncategorized By JamesDuffyPosted on April 15, 2015November 11, 2019

The Amazon is a critical, globally important ‘carbon sink’ which over recent decades has been absorbing more carbon dioxide (CO2) from the atmosphere than it releases—helping to put a modest brake on the rate of climate change by taking up an additional 2 billion tonnes of carbon dioxide each year.

Last year it was confirmed that due agricultural deforestation and cattle ranching, the destruction of the Amazon rainforest has caused its moisture-generating mechanism to weaken. The rainforest has degraded to such a point where it can no longer regulate its own precipitation systems and there have been droughts in Brazil

Now, the most extensive land-based study of the Amazon has shown that tree mortality rates have increased by more than 1/3 since the mid-1980s and the capacity of the Amazon rainforests to absorb carbon dioxide has weakened, and is decreasing over time.

Why are the Amazon Trees Dying?

There were two schools of thought on how tropical forests and trees could respond to global changes:

Human activities, such as the burning of fossil fuels and the increase of animal agriculture, however, have dramatically increased the amount of carbon dioxide that is now in the atmosphere which has had an unexpected consequence to the Amazon rainforest.

Faster growth, which is consistent with a CO2 stimulation, is now causing trees to also die faster. As the extra carbon feeds through the system, trees not only grow quicker but they also mature earlier. In short, they are living faster, and therefore dying younger.

The trees in primary, undisturbed areas across the basin of the Amazon rainforest have been dying off at an increasing rate—tree mortality rates have surged by more than 1/3 since the mid-1980s, while growth rates have stalled over the past decade. This had a significant impact on the Amazon’s capacity to take-up carbon.

The Amazon rainforest has acted as a vast sponge for atmospheric carbon where it was responsible for 1/5 to 1/4 of total carbon dioxide sequestered on land.

The study found that the Amazon’s overall ability to soak up CO2 dropped by 30% from the 1990s to the 2000s, while during the same time global CO2 emissions rose by 21%. From a peak of 2 billion tonnes of carbon dioxide soaked up each year in the 1990s, the net uptake by the rainforest has weakened by a half, and is now, for the first time, being overtaken by fossil fuel emissions in Latin America.

To measure the shift in carbon storage, the scientists studied 200,000 trees in using on-the-ground measurements from a network of 321 long-term forest monitoring plots scattered across 8 countries in the Amazon. They tracked tree births and deaths, as well as the changes in diameter, height and density of different species.

The Amazon rainforest is also being greatly impacted in another way—agriculture expansion for cattle ranching and soy production are having enormous implications. Rapid deforestation has actually caused the Amazon’s precipitation moisture-generating mechanism to weaken to the point where the Amazon no longer regulate its own systems. As a result, many major urban communities in South America are experiencing droughts

Already an estimated 3 million trees are cut down every single day to make way for agriculture expansion. It is expected that by 2018, the beef export will increase 93%, thereby increasing Brazil’s beef market share of world exports to 61%. And when beef is the most carbon-intensive form of meat production on the planet, it only contributes to and exacerbates the problem of Amazon tree mortality.

We’re not only gutting the Amazon rainforest for agriculture, but a flow-on effect is causing remaining trees to live faster and die younger. 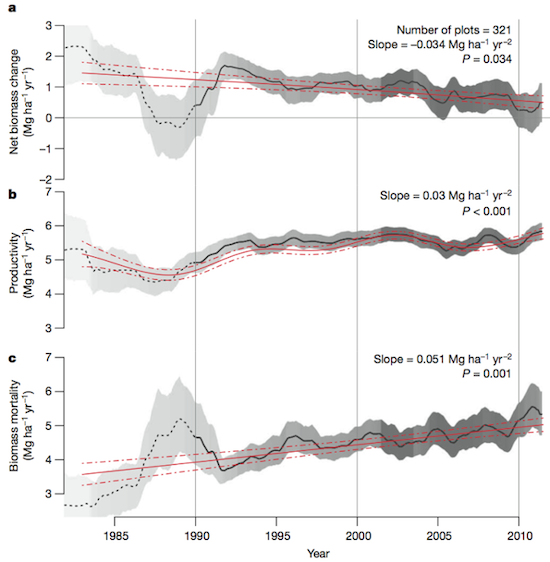 To measure the shift in carbon storage, the scientists studied 200,000 trees in using on-the-ground measurements from a network of 321 long-term forest monitoring plots scattered across 8 countries in the Amazon. They tracked tree births and deaths, as well as the changes in diameter, height and density of different species. Graph B shows plateauing growth rates during the 2000s. Graph C shows a strong upwards trend in tree death over the last 20 years. Graph A combines the slower growth and increased die-off to produce a drag on the amount of carbon soaked up by a hectare of forest each year. Droughts during 2005 and 2010 are clearly visible as large increases in mortality.