Skip to content
Posted in Uncategorized By JamesDuffyPosted on March 26, 2014November 11, 2019

It may surprise you to learn that Brazil is actually the world’s largest exporter of cow meat with largest commercial cattle herd of approximately 180–190 million. The total export value sky rocketed from $1.9 million to $1.9 billion between 1996 – 2004. 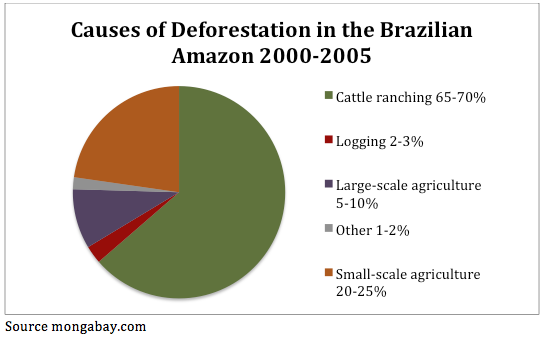 As a result, approximately 91 million kilograms (200 million pounds) of beef is imported by the US from Central America every year alone. Europe and North America were previously the biggest importers of Brazilian beef, however now countries such as China and Russia consume more than the European market.

See More: Beef Production in the Amazon is Causing Droughts in Brazil

As our global population continues to grow, so does the demand for the number of animals grown and killed for food. The word unsustainable continues to represent a vast number of growing opinions, including that of the United Nations, who are urging the world to shift to a vegan lifestyle.

To support the expansion of the beef industry, the Brazilian government offers loans of billions of dollars. These government agricultural subsidies are provided yearly to farmers and agribusinesses across the world and are absolutely ginormous in price—otherwise they could not afford to stay in business. These subsidies supplement the agribusinesses income so they can afford to manage the supply of animal commodities (including their unnatural feed of soy, corn, oats, wheat), and influence the cost and supply of such commodities.

It is expected that by 2018, the beef export will increase 93%, thereby increasing Brazil’s beef market share of world exports to 61%. Beef is the most carbon-intensive form of meat production on the planet. The United Nations Food and Agriculture Organization finds that beef production gives rise to more greenhouse gases than the transportation industry.

As some companies are taking steps to only buying certified cattle where producers maintain their forest reserves, and the Brazilian government hands out $300 million in fines in 2013 to illegally raised cattle, the impact reduction to the Amazon rainforest and our environment is not enough to make any substantial difference to the amount of deforestation occurring due to cattle ranching.

Beef Production is Ravaging the Amazon Rainforest
Scroll to top