Skip to content
Posted in Uncategorized By JamesDuffyPosted on July 7, 2015November 11, 2019

Studies show that the fat in animal meat and dairy can cause insulin resistance and the progression of type 2 diabetes. Diabetes is ranked in the top 10 leading causes of death in Australia, while it is the 7th leading cause of death in America.

Rates of type 2 diabetes have increased markedly since 1960 in parallel with obesity. As of 2010, there were approximately 285 million people globally diagnosed with type 2 diabetes compared to only 30 million in 1985. Disturbingly, this type of diabetes was only once seen in adults but it is now also occurring in children.

It is estimated that by 2020 more than 50% of Americans will have pre-diabetes or diabetes. In Australia, diabetes is expected to become the number one burden of disease by 2017 as already an estimated 280 people develop diabetes every single day. This chronic metabolic disease is one of the fastest growing global problems that has huge social, health and economic consequences and meat-centric diets are a primary cause. 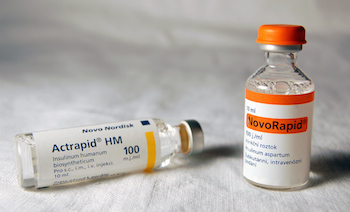 How Animal Fat Can Prevent the Function of Insulin

To understand how this occurs, let’s take a step back and understand the role of insulin in the human body.

Insulin is an incredibly important peptide hormone produced by the pancreas which regulates our metabolism of carbohydrates and fats. As the human body breaks down carbohydrates into glucose in our digestive tract, it then circulates in our bloodstream as blood glucose (blood sugar). Insulin is what then allows the absorption of glucose from our blood into our muscle cells. The glucose is then stored and burnt for energy. However, glucose actually needs an ‘invitation’ before it can enter our muscle cells and the ever important insulin is what ‘unlocks the door’.

Studies show that animal fat in meat and dairy can actually stop insulin from letting glucose into our muscle cells.

Studiesshowthat animal fat in meat and dairy can actually stop insulin from letting glucose into our muscle cells. As fats (intramyocellular lipids) build up inside our muscle cells, a toxic fatty breakdown product is created that can block the insulin signalling process and prevent the proper functions of insulin occurring.

This is known as insulin resistance which leads to the progression of type 2 diabetes.

As a direct result of insulin resistance occurring, the body needs higher levels of insulin to try and help glucose enter muscle cells. The beta cells in our pancreas kick into overdrive to keep up with this increased demand for insulin by producing more. However, if the beta cells cannot keep up and the body is unable to use insulin effectively, then glucose levels in the blood build up and we exist in a state of hyperglycemia—this leads to type 2 diabetes.

How glucose is absorbed with the help or ‘invitation’ of insulin versus insulin resistance where glucose remains in the bloodstream.

In the case of a type 1 diabetic whose pancreas produces no insulin at all, blood glucose remains in the bloodstream constantly ‘banging on the door’ to get into the muscle cells. From here, biosynthetic insulin needs to be injected.

See More: Why is Animal Meat Inflammatory to the Human Body

For the sufferers who make up 90% of the diabetic population, the pancreas of a type 2 diabetic produces insulin as it should, but their body fails to use it effectively. The prevalence of type 2 diabetes is thought to be astronomically high as almost 50% of the putative diabetics are not diagnosed until 10 years after onset. Here, many are stuck in a chronic inflammation danger zone. 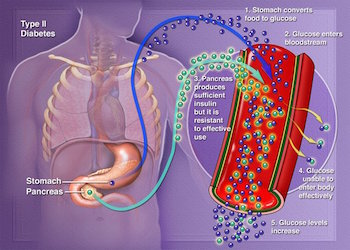 In the case of type 2 diabetes, glucose remains in the bloodstream.

Being overweight or obese is the number one risk factor for type 2 diabetes. Diabetes has a myriad of complications associated which affect the feet, eyes, kidneys, nerve endings and cardiovascular health. Cardiovascular disease (CVD) is the primary cause of death in people with pre-diabetes or diabetes—in Australia, 65% of all CVD deaths relate to diabetes.

Furthermore, 41% of people with diabetes also report poor psychological well-being with reports of anxiety, stress, depression and feeling ‘burned-out’ from coping with their diabetes.

Early studies had begun to unravel the mystery of animal fat in meat and dairy causing blood sugar spikes up to eight decades ago with tests involving fat-rich and carb-rich diets. Such studies hold the key to our current understanding today of the cause of type 2 diabetes.

1934 Study: Within just two days, blood sugar levels skyrocket and double in the fat-rich group, whose diet consisted of only olive oil, dairy butter and mayonnaise made with egg yolk and 20% cream, while the carb-rich diet consisted of sugar, candy, pastry, white bread, baked potatoes, syrup, bananas, rice and oatmeal.

We don’t actually need a new breakthrough in diabetes prevention—we just need to put into practice what we already know. Obesity is the number one risk factory for type 2 diabetes and estimates show that eliminating obesity from our population can potentially reduce the incidence of type 2 diabetes by over 40%.

There is large-study evidence that type 2 diabetes is completely preventable for at least 93% of people today by adhering to healthy dietary principles involving fruits, vegetables, wholefoods and regular physical activity, while limiting inflammatory foods like processed red meat and other animal products which have direct associations to obesity and type 2 diabetes.

Plant-based diets focusing on wholefoods that are high in fibre and low in fat have substantial potential to protect against obesity and protect against the risk of type 2 diabetes In 2009, the first ever study done on American vegans was published in the American Diabetes Association which showed that out of 60,893 subjects, there was a 5-unit BMI difference between vegans and meat-eaters.

See More: Specialist Doctor Who is Not Concerned About a Vegan Diet

As the evidence builds that animal product centric diets are inflammatory and promote a growing list of conditions and chronic diseases, plant-based diets continue to make forward strides in human health, lowering the risk of chronic disease, reducing the burden on health care systems, as well as having the potential to be a more calorie and resource efficient sustainable food system.