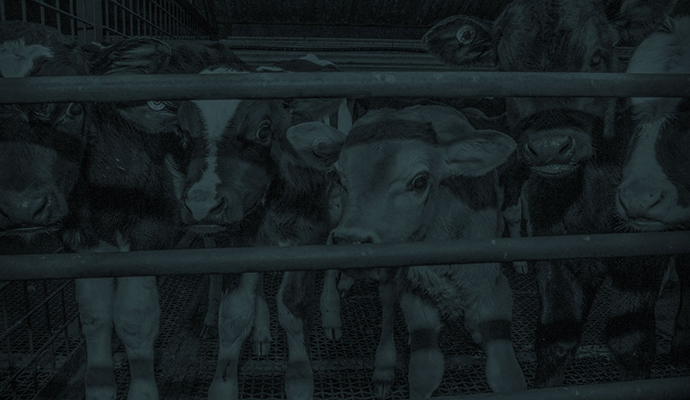 This morning thirty Animal Liberation Victoria activists have begun peacefully protesting at the Dairy Australia headquarters demanding an end to death row for baby calves who are seen as “waste products” of the dairy industry. The activism today coincides with the release of never before seen footage of baby cows being slaughtered in Australia.

Nursing human mothers are delivering milk cartons filled with “blood” to the Dairy Australia director, symbolising the 800,000 baby cows killed by the Australian dairy industry each year. Last year Animal Liberation Victoria released what was described as damning undercover footage of the how pigs are killed in gas chambers under extreme stress, which sent shock waves throughout the country, providing a growing body of evidence that farmed animals are undergoing horrifically brutal treatment.

Warning: This video is likely to be distressing to most viewers.

Today, the actions of Animal Liberation Victoria activists is paired again with their release of their Cow Truth undercover footage gathered over the last year and it is nothing but stomach churning. Like other mammals, a mother cow must give birth in order to produce milk and as a direct result, the separation of cow and calf shortly after birth is an integral yet distressing part of modern commercial dairying.

The mother-calf separation is one of the most psychologically damaging aspects of dairy farming, though it remains largely unknown to the public and is notably absent in the “feel good” marketing of dairy products. The early removal of hundreds of thousands of calves denies the mother cows their natural expressions of maternal and nurturing instincts. While the calves must only suffer the stress of separation once, mother cows are forced to endure repeated pregnancies and separations until their bodies no longer produce a productive amount of milk. These mother cows are sent to slaughter and end up as cheap, hamburger meat.

Mother cows have no way of protecting their calves when humans dominate and control them inflicting enormous amounts of stress and anxiety.

Calves who are not transported to farms, sale-yards, or slaughterhouses are either sold for dairy or beef rearing, or killed on-farm. It is estimated that over 65,740 calves are slaughtered on-farm each year, their carcasses either immediately disposed of or processed at local knackeries.

In Australia the recommended way to kill ‘weak’ newborn calves is with blunt force trauma to the head, that is, sledgehammering them to death. Every year thousands of calves are killed in this manner with blunt instruments such as hammers. Horrifyingly, you can find instructions on how to do this on the Dairy Australia website.

Manually applied blunt trauma to the skull has been found by veterinary experts to be a cruel, imprecise and inhumane method of slaughter that cannot and should not be justified on economic grounds. The American Veterinary Medical Association (AVMA) deems it an unacceptable method of euthanasia for calves because their skulls are too hard to achieve immediate unconsciousness or death.

Humans have no nutritional requirement for animal milk and is an evolutionarily recent addition to our diet. Adequate dietary calcium for bone health, often cited as the primary rationale for high intakes of milk, can be obtained from many other sources.

Cow’s milk has been found to contain trans-fats, saturated fats, cholesterol and mercury. Cow milk consumption is known to increase serum concentrations of Insulin-like Growth Factor-1, an anabolic hormone linked to prostate and other cancers. The industrialised dairy milk supply also results in high levels of female reproductive hormones being consumed by humans. Various studies show that dairy milk is the number one cause of osteoporosis, that high milk intake is associated with higher mortality, and higher fracture incidence in women.

A world who claims to be and continuously works towards being civilised cannot justify with any valid morality or logic the brutalisation of non-human animals anymore. It’s time to stop this violence, it’s time to stop being selfish, it’s time to evolve and go vegan. We are able to live healthy, nutritionally balanced lives without consuming animal products—the only excuse for consuming them is out of pure selfishness.