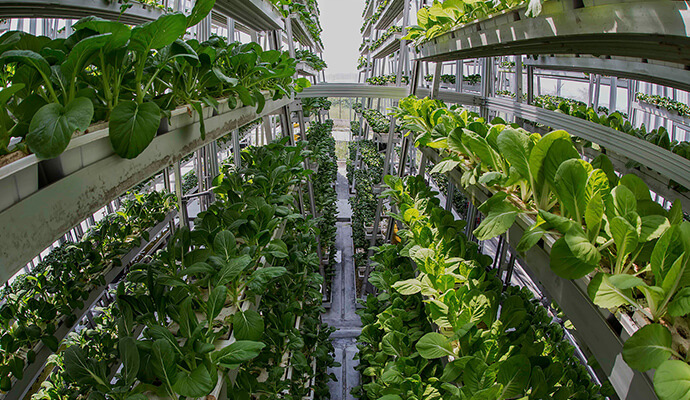 Posted in Uncategorized By JamesDuffyPosted on February 23, 2016December 30, 2019

Urban agriculture as we know it has been undergoing a facelift where the modern idea of cultivating plant life within skyscraper greenhouses or other vertically inclined surfaces is booming across the globe. Vertical farming is the new agriculture technique that has the ability to grow crops year-round in perfect, pesticide-free, hydroponic environments with substantial energy and water resource savings and drastic cuts to pollution.

Such efficiencies of these indoor plant farms are coined to be part of the answer to the global food supply problem and to play their role in an evolutionary stride forward in how a booming human population—70% of whom will be living in urban areas by 2050—can achieve an aggregation of plant nourishment and help secure the global food system.

Vertical Farming: Part of the Future

The intersection of a growing global human population and the demand for a sustainable food supply is one that can no longer be ignored. Our focus must be on re-developing the global food system into one which is less reliant on massive inputs of freshwater, non-renewable energy, land use, subsequent pollution, and the disproportionate use of grain crops, which are fed to billions of farmed animals instead of directly to human mouths.

While our interconnected food system is globally complex, vertical farming stands up as one part to the revolution required for a sustainable future.

As the price of LED lights have come down, it’s becoming much more affordable to create indoor environments that grow produce that are similar to the traditional glasshouse. Instead, natural sunlight is augmented with artificial LED lighting, and sprinkler irrigation and pesticides are replaced with hydroponics and closed-looped irrigation systems, which in some instances require 70% less water than open-field farming. Beneficially, vertical farming irrigation mean that all of the nutrients are kept within a closed-loop irrigation system and this creates no agriculture run-off—unlike what we see smashing the Gulf of Mexico every spring, as well as 550 other ocean dead zones that exist around the globe as a result of damaging current agriculture methods.

Hydroponics systems are often combined with aeroponic mist, which is packed with nutrients and oxygen so root systems are able to thrive. These fine droplets of water provide all the nutrients of soil provided without waste, so they’ll grow more robust more quickly.

London is making use of old WWII-era bomb shelters to host eco-friendly farming businesses. A Japanese indoor farm is able to produce 10,000 heads of lettuce each day with with 40% less power, 80% less food waste, and 99% less water usage than outdoor fields. Parts of America are bustling with container farms and aeroponic soil-free vertical farming, while Chicago is now home to the largest and first organically-certified indoor farm in North America boasting a 2-acre (90,000-square-foot) space that opened in 2013. There are even experimentations with underwater biospheres in Italy happening, and architects in Spain have designed a three-storey floating farm that could produce ten tonnes of extra food each year.

The future certainly seems a bit brighter with the advancements of such mass-produced plant agriculture in hermetically sealed buildings where production is planned, fast growing, and space optimised, while they use no pesticides, have no devastating run-off into the ocean, and far less climate change effects. Even at the small-scale operation end, home setups the size of bookcases will even be possible, taking the strain off major producers and reducing transportation pollution.

The Benefits of Vertical Farming

The future of this planet looms with resource wars and with good reason given how our species abuses the environment. Anxiously, today the world faces scarcities of just about everything necessary to produce high yields of food—land, water, nutrients, oil, technology, skills, stable weather patterns—each one playing into and compounding the others.

A recent scientific model, developed by a team at Anglia Ruskin University’s Global Sustainability Institute, has indicated that society will collapse in less than three decades due to catastrophic food shortages, if current industries and behaviours do not change. While this model does not take into account humans reacting to the escalating crisis of climate change—and we barely are in any substantial manner—our current way of life and nourishment is unsustainable and will have dire worldwide consequences.

Our modern society has a vast interconnected food system that involves billions of sentient animals and a large variety of plant life. The food system is global in reach and is designed to harness a multiplicity of complex supply chains, but it is facing major threats to its sustainability due to the growing global water scarcity, deforestation, ocean dead zones, land degradation, ecosystem destruction, and inefficient calorie results from the disproportioned amount of grain crops being fed to farmed animals. Alongside this are additional pressures from rising incomes, the growing adoption of westernised diet in China, general gluttony, climate change, and growing energy demands.

The results show that based on plausible climate trends, and a total failure to change course, the global food supply system would face catastrophic losses, and an unprecedented epidemic of food riots.

Furthermore, a 2015 report from the Lloyds of London had experts in the field of food security and the economics of sustainable development developed a scenario describing a plausible, relatively severe production shock affecting multiple agricultural commodities and regions, and to describe the cascade of events that could result.

The report concluded that the “global food system is under chronic pressure to meet an ever-rising demand, and its vulnerability to acute disruptions is compounded by factors such as climate change, water stress, ongoing globalisation, and heightening political instability.”

Unlike traditional farming in non-tropical areas, indoor vertical farming can produce crops year-round. This ability to farm all-season multiplies the productivity of the farmed surface by a factor of 4 to 6 depending on the crop. With some crops, such as strawberries, the factor may be as high as 30.

Like what we’re seeing in the revamped London bomb shelters, many crops would be sold in the same infrastructure or via local mediums to which they are grown. Cutting down on transportation time and costs between production and sale results in less spoilage, infestation, pollution, and energy required. Attitudes also change—who wouldn’t prefer supporting and picking up their vegetables for the next few days from a local indoor organic farm rather than a large chain supermarket who only care about money?

Fruits, vegetables, roots, and tubers have the highest wastage rates of any food in the world, where global quantitative food losses and waste per year are roughly 30% for cereals and 40-50% for root crops, fruits, and vegetables. While the waste of animal-based foods has a larger detrimental environmental impact, fruits and vegetables have the highest waste rates. Vertical farming for local urban distribution and indoor home setups one part of the solution to combating this global crisis.

By 2050, the 7-8 billion people that inhabit the world’s cities will use about 2800 cubic kilometres of fresh water—more than the whole of irrigation agriculture uses worldwide today. A 2016 journal published in Science Advances has stated that at least two-thirds of the global population—4 billion people—live under conditions of severe water scarcity at least 1 month every year.

Currently, 70% of the world’s freshwater resources are used for the agriculture system and approximately one-third of that is needed just to grow feed crops for farmed animals. We need to stop wastefully using what remaining fresh water we have left on food systems that produce inefficient calorie returns. The farmed animal industry is a major consumer of scarce water resources and generally, animal products have larger water footprints than non-animal products. The UN estimates that producing 1 kg of beef requires some 15,000 litres of water. In comparison, 1 kg of rice requires about 3,500 litres of water.

Vertical farms report using between 70-99% less water than their outdoor farming counterparts, and recycling of water is also of focus. The common 3R principles—reduce, reuse, and recycle—mean that water is recycled and filtered before circulating back to the plants and all organic wastes are also composted and reused. Even urban wastes like black water are able to be composted, recycled, and used for farming inside the buildings.

The remaining fresh water that we do have needs to be used in far more efficient ways in order to preserve our future, and plant nourishment is arguably more efficient than animal-based products.

Anaerobic digestion systems offer massive potential for low-cost energy lighting and heat by replacing energy derived from fossil fuels—and hence reduce emissions of greenhouse gases—because the carbon in biodegradable material is part of a carbon cycle. By converting things like food waste, municipal wastewater solids, high strength industrial wastewater and residuals, fats, oils, and grease, and various other organic waste streams, into biogas for power and heat, vertical farms can potentially run as or near being carbon neutral

An example, a vertical farm in Chicago captures the methane from 27 tons of food waste daily and 11,000 tons annually and runs at net zero.

It is estimated that by the year 2050, close to 70% of the world’s 10 billion population will live in urban areas, up from approximately 50% today. The FAO states that we will need to produce 70% more food for the additional 2.3 billion people by 2050. In order to provide food security to that number of people, Earth’s land needs to be used more efficiently, logically, and with greater respect.

Land covers only 29% of Earth, some 33 billion acres, while the rest is water-covered. 10 years ago farmed animals occupied 33% of the Earth’s ice-free land. More recently, animal agriculture systems are thought to occupy a whopping 45% of Earth’s global surface area More than two-thirds of all agricultural land is devoted to growing feed crops for farmed animal consumption, while only 8% is used to grow food for direct human consumption.

Global meat consumption has already reached unsustainable levels and is expected to increase by 76% by 2050. It would be entirely remiss to ignore the fact that animal agriculture creates vast amounts of emissions pollution—typically, it is quoted as 11%-15% of global greenhouse gas emissions, but other studies show it’s closer to 43-57% as they look at food production more holistically.

While vertical farming aids in using less land, it doesn’t simply solve the problematic land use of animal agriculture. This is an issue that must be addressed independently and vertical farming of plant foods should not be hijacked as a method for reducing the burden of animal agriculture, which will always be highly inefficient in terms of calories produced and resources used.

The intersection of a growing global human population and the demand for a sustainable food supply is one that cannot be ignored. The produce yield per hectare is going to have to increase and vertical farming is definitely one part of the solution, but it’s not the only thing that must evolve. Plant-based diets use less water, land, and other resources, while causing less pollution, emissions, and biodiversity loss, while they aid in lower rates of type 2 diabetes, cardiovascular disease, and some cancers. It’s time to evolve.

Vertical Farming is the New Agriculture | Shellethics
Scroll to top